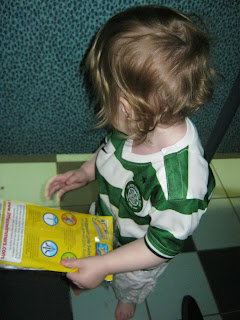 Yesterday I was trying to think of something for us to do as a family, we don't live in a big city, the closest big city to us is Glasgow and that's an hour away.

I've lost count how many times we've taken Alesha to the indoor softplay and the local park, so we just wanted a change.
Were grateful enough to live 20 minutes from Scotland's largest theme park but considering Alesha is only 16 months there isn't much she can do plus we have been there a few times, but it's a place where you need abit of money as we normally have our dinner in the restaurant and daddy and mummy like to have fun aswel. "Make a day of it, if not why not"!

Then I thought, 'swimming'! We haven't been swimming since we came back from our holiday on 1st April, so it's not as if Alesha sees too much of the place and has got bored of it, so swimming it was!

Alesha is a water baby, unlike me who panic's if someone splashes me and I get water in my eye. I have never been one for swimming, I remember swimming lessons and I would say I've forgotten my costume just to get out of not doing it. My mother has tried on numerous occasions to teach me how to swim, but there is no way I'm taking both legs up off the ground, not for anyone! 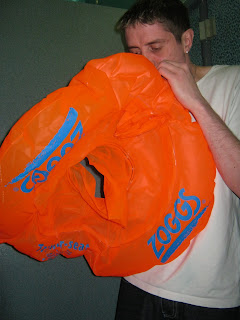 Alesha was so excited in the changing room when we were saying, "you going swimming and for a splash". It was wonderful watching her get so happy trying to get out the door to do her splashes.
We were in the pool for 1 hour and 30 minutes, it really didn't feel that long because Alesha wasn't moaning because she enjoyed being in water splashing and going on the slides.
Think we need to invest in a pair of armbands before we go back because she has a swimming seat but she isn't so keen with it as she likes to be and trying to swim.

Now it's time for my rant! There was a boy about 5 coming over to Alesha and splashing her right in the face and laughing, whilst his blooming dad was just stood there looking!! DUH my daughter is only 16 months and can barley hold herself up, let alone splash your bloody soon back! 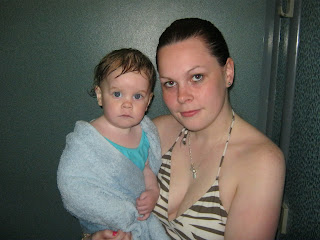 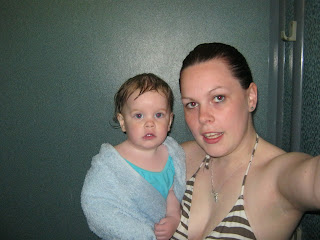 Anyways, put aside that, we had a lovely day and Alesha went straight to sleep as soon as we got home.
We took some photograph's in the changing room as weren't allowed to take any near pool side.
Posted by Unknown at Saturday, April 16, 2011