After all the worrying, about would Haven be any good? Would it be clean? Would it be this and would it be that, I can finally answer all those questions! It was good, it really was!

Me, Andrew, Alesha and my mother-in-law went for a short 4 night break away to Craig Tara Haven on 28/03/2011. I booked the superior so our check in wasn't till 4.00pm, we arrived at 1.00pm as we wanted to look about and have something to eat. Upon arrival we were allowed to leave our suitcases in the 'Hire Centre' for £1 per case, which was great!
We got the keys, maps and helpful information at 4.00pm and then went straight to the caravan. The caravan was gorgeous, 'I wouldn't mind owning one, if I had the money'. It was very modern and everything was clean, also had a flat screen TV even though on the website it showed a small portable, 'I'm not complaining'.

There was loads of stuff to do for all ages. We booked Alesha in for swimming classes which were free and they were held each morning. Also for her age group they held a 'Messy Morning' where the children were sat on the floor colouring and painting, 'my little star made a lovely painting'. During the day and evening there was plenty of shows put on for the children and at night time there was bingo, and tribute's act and much more for the adults. 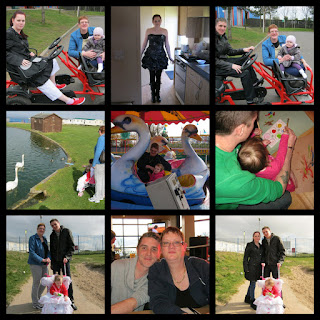 A fun fair was situated at the bottom of the park with plenty of rides for children and babies and also go karts where I took on Andy, it was a good laugh.

The arcade had a wide choice of machines and little rides for children. I must admit the shop was reasonably priced, we was expecting the prices to be a bit over the top.

I became very proud of myself on 29th March because I walked on water! Sounds crazy, doesn't it? I thought the same. As I have a fear of swimming (even though my mother tried a numerous of times to keep me in swimming lessons) and I have panic attacks, I decided to go ahead with this activity. A lifeguard blew up a big ball and I stepped inside then he zipped it up and you can only breathe the air which is inside the ball. This ball was attached to a rope so he was pulling and swinging it about whilst I was trying to walk. It was a great laugh but within 2 minutes I was waving my hand to be took out as I couldn't breathe. Andrew was laughing so much as he taught it was easy until he stepped inside, he lasted longer than me but admitted it was mad! 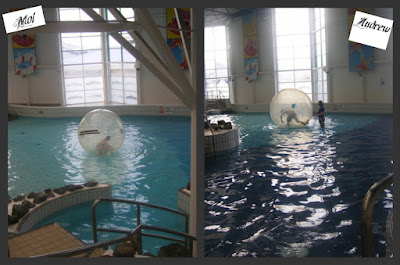 Now it's time to write about the stuff that didn't make us smile!


Overall, we had a lovely holiday and I would recommend.
Watch out Haven, we may be back!!! 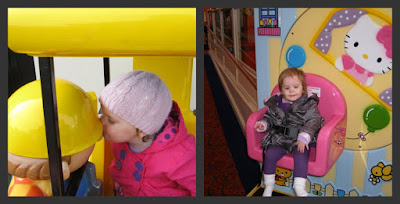