I was contacted and asked if I would like to review the Colman's Season and Shake and of course I said yes! Being a mother that cooks with many other sauce mixes from the Colman's range, with my favourite having to be the, Tuna Pasta Bake, 'yum yum for my tum tum'. 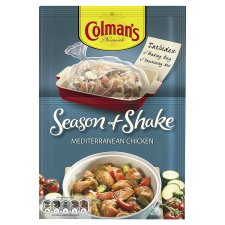 Useful info about Colman's Norwich
'The world famous brand was founded in Norwich over 180 years ago, making it the oldest name in Unilever's portfolio'.
Colman's doesn't just do sauce mixes, you can also find the Colman's logo on their mint jelly and mustard.
Norwich Chronicle was the first place Jeremiah Colman advertised his mustard way back in 1814.

Would you like to know some useful facts about Colman's?


Simplicity of the product (Season and Shake)
The packet was very well presented, it has 2 pictures on the front, firstly of the food in the bag before it went into the oven and then a picture underneath of when it came out of the oven.
Both of the pictures attracted my attention, the food looks delicious, I couldn't wait to go shopping and get the bits I needed!
I was cooking the 'Mediterranean Chicken' one, it said for the shopping list you needed,


None of us are keen on courgette so instead we added half an onion and also a green pepper.
It was very easy to prepare and also showed you on the back of the packet how to do it. I just placed everything into a bag, tied it and gave it a good shake and placed it on a tray and popped it into the oven which was set at 190C.
The smell coming from the kitchen whilst it was cooking was mouth watering!
I left it in the oven for 45 minutes which was well enough.
Finally me, Andrew and Alesha were able to use our tastebuds and test the meal. After Alesha had one forkful she was going "mmm more" and that's how me and Andrew felt aswel, we couldn't get enough, it was lovely and we will be buying them in the future!
Availability (Season and Shake)
These can be purchased from a wide range of local shops, large supermarkets and even online stores. For as little as £1.49 you can buy one packet from Tesco's.
Rating