I love shopping for cute clothes and shoes for Alesha, what woman doesn't?


I have numerous of shoes and clothes, keep telling myself that I am going to do a clear out but just dread it!

Hopefully Alesha doesn't grow up to be shoe mad like me, but with a mother like me, you never know!
To add to Alesha's collection of clothes and shoes, Frugi sent us a gorgeous dress and zipper hoodie to review.
Useful info about Frugi
It all begin in 2004 when Lucy and Kurt had their first baby boy. The soon began to realise that it was a struggle to find baby clothes to fit their son who wore cloth nappies.
They came up with a brilliant brainwave to make their own baby clothes and sell them to people that were in the same situation as them, and so they did and they named their business Cut4Cloth.
'With things going so well, Lucy and Kurt decided to extend the range. They started making some organic kids clothes, and after their second son was born Lucy realized how rubbish her nursing clothes were so they introduced some breastfeeding wear too'.
'At that point the name ‘Cut4Cloth’ no longer seemed to fit the bill. So, in 2008 we had a bit of a facelift, and changed the brand name to Frugi which means ‘fruits of the earth’ in Latin'.
Frugi are well known for their 100% organic cotton clothes!
Dress
The dress we were sent was the lovely, 'Cornish Blue Daisy Dress' in size 12-18 months which fitted Alesha perfect. I loved the colour's of this dress, they were very eye catching! 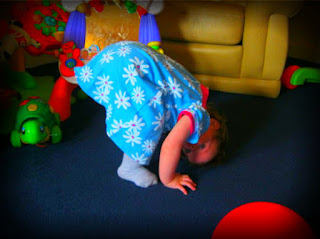 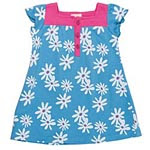 The material very thick, unlike alot of cotton dress she has, even my mother commented on the materiel on both the dress and hoodie.
There wasn't a problem putting the dress on, once I opened one of the three buttons it went over her head no problem.
Even after washing this dress twice, it still remained in it's actual shape and colours.
Hoodie
The gorgeous hoodie we were sent, I can't seem to find the name of it on their website, think they are sold out, that's how good of a hoodie it is! 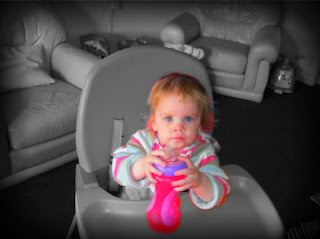 'Silly Gilly' (moi) never knew that it was a reversable hoodie, duhhh!
It actually took my mother to point it out to me, after a few minutes of her seeing it on Alesha.
I can't be much of a clothes fanatic can I?
This hoodie's size was 12-18 months and also fitted my little bundle of joy Alesha perfect!
After washing it, there was no disappointment! It remained just like it was when I received it.
Availability
Frugi caters for children from as little as newborn right upto 8 years old. Their gorgeous clothes can be purchased via their website.
Rating