We try to eat breakfast as a family as often as we can.
You would normally find Alesha tucking into, toast, fruit, warm oaty cereal or sometimes croissants.
Me and Andrew on the other-hand eat a wide range of cereals, croissants, toast and fruit for our breakfast.

When I was contacted and asked if me and my family would like to review Honey Monster's new breakfast cereal 'Honeycomb Puffs', there was no hesitation as we enjoy eating breakfast cereals. 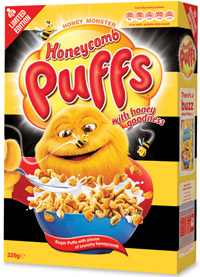 In 1954 they toured England in a sugar puff train. It visited fairs, fetes and carnivals. Children got to have a ride on the train but best of all they got to try the new honey coated cereal!

Simplicity of the product (Honeycomb Puffs)
This is the new limited edition cereal and we couldn't wait to try it!
It was just the ordinary sugar puffs but also included in the bag was honeycombs.

The box was brilliantly designed to the 'honey' theme, it had a black and yellow striped pattern and had a picture of a bumble bee near a bowl of cereal.

Me & Andrew try not to give Alesha much sweet food, so testing this cereal was me & Andrew!
We both enjoyed it, it had the great same taste as the normal sugar puff cereal, the honeycombs were lovely, not very sweet which was a good thing.
The first bowl of cereal I poured for myself I only came across 3 pieces of small honeycomb and Andrew's first bowl he only came across 2. From the rest of the bowls we had we never came across more than 5 honeycombs.
We were both expecting a bit more than that as some of the honeycombs are smaller than the puffs. 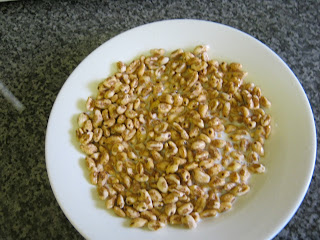 Availability (Honeycomb Puffs)
This limited edition cereal can be purchased from a wide range of supermarkets and even online.

For more information take a look at their website, they also have Facebook!
Posted by Unknown at Tuesday, April 12, 2011