I was really happy to have made a lovely patchwork cushion lastnight from a few of my darling daughter's baby vests & sleepsuits.

I came up with the idea a few weeks ago when my Andrew bought me a Singer 449 sewing machine from the carboot. As soon as he brought it home, my imagination was running wild picturing all the things I could try and make.
Unfortunately, it wasn't working the way it should be so Andrew had a look inside and realised the gear was totally worn out, so off on Google I was to find a singer site that sold a suitable gear and placed an order.

When the gear arrived Andrew inserted it into the machine, I then tried sewing and thought 'bingo' it's working, but I was wrong. It would sew no problem but every couple of seconds it would stop, an absolute nightmare.

So went on my local 'Netmums' and put a post up to see if anyone had a clue about sewing machines and fancied coming out to try and get mine working, eager to start sewing.
A lovely lady replied to my post and came out the following day, she had a good look at it was said it was basically buggered!

So my loving Andrew bought me a new sewing machine this time and I'm happy to say it's working!

Lastnight I cut up some of Alesha's vest and sleepsuits and sewed them altogether to make a cushion, bare in mind it was my first attempt. To stuff it I used the fluff from inside a spare pillow.
The outcome was good, will need to practice more on my sewing skills. A lovely little keepsake for Alesha. 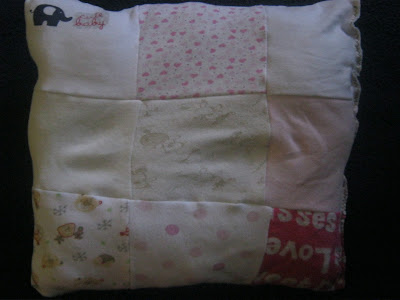