My father-in-law (to be) came over from Ireland on Tuesday to visit us for a few days.

We decided to throw him a surprise 60th Birthday party because we weren't over in Ireland on the day of his birthday.
As soon as we booked his flight ticket and knew the day, my partner rang his aunt and cousin to ask them to come up to the party, my father-in-law hasn't seem them for a while, so it would be a lovely surprise.
Yesterday morning arrived, so Andy said to his dad, "do you fancy going town for a while as I need to pick up a few bits", and so they did and they also took Alesha with them. 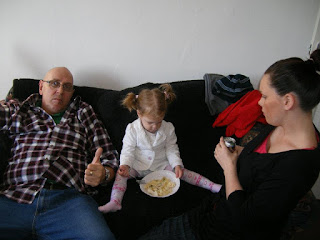 As soon as they left I cracked on with the buffet, we had bought a ready made sponge cake and some ready made icing, so I just rolled out the icing and laid it onto the cake, trimmed off the excess and then grated some white and milk chocolate over the top and pushed the number 6 and 0 candle into the cake.
I would of loving to bake him a cake but I just didn't have the time!
I was running about like a headless chicken but kept having to having a few minutes to sit down because I'm still recovering after the operation.
When I had the food done, I quickly went to get dressed and that's when I received a text from Andy saying, 'his cousin and aunt were stuck in traffic, so him and his dad were going to come home because they were getting bored in town, but it would still be a surprise when they walk through the door because he hasn't got a clue'! 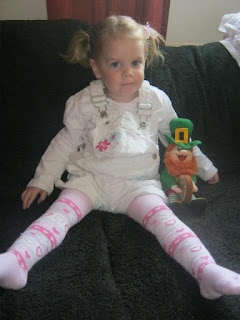 I then began to put the 'Happy 60th' banners up when I realised the balloons were nowhere in sight, so I searched everywhere I could think they would be, but no luck. So I rang Andy and he didn't know where they were, so on the sly he nipped into a shop to buy 2 packets whilst his dad waited outside with Alesha!
When they arrived, he got a shocked when he seen the buffet and banners, and so we said, "we decided to throw you a little party"! 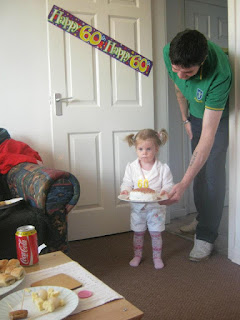 Then Andy got a text from his Aunt saying were just there, Andy said I am just going to check electric meter box but he wasn't, he went out to greet his family. At the same time Alesha was on the couch playing with her grandad and then he heard a voice saying, "well haven't seen you in 2 years" and he got such a fright but to see the biggest smile on his face was lovely!
Then in came his niece and her 2 daughter's, so I got the camera at the ready.
We all had a lovely day but more importantly my father-in-law (to be) really enjoyed himself. 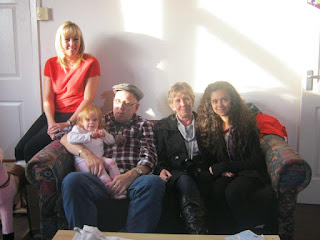 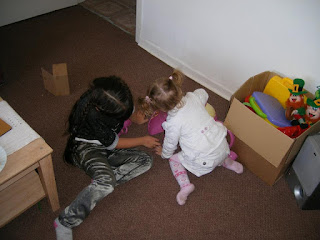 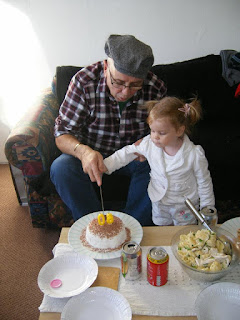