I'm Taking Part In The Kodak Christmas Crafts Challenge..Are You? 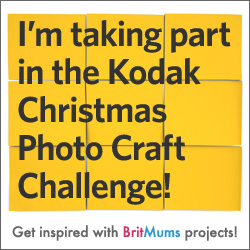 I joined the Britmums community a few days after I started blogging, Britmums helped me find my feet in the world of blogging!
They have got a challenge running at the moment- the Christmas Photocrafts Challenge! #printerprojects which is encouraging everyone to use their printer and Kodak’s cheaper-than-you’d-think printer ink to create gorgeous Christmas decorations, treasured keepsakes and memorable gifts.
I love to get creative with Alesha especially at Christmas time making Christmas cards and placing an old photo of the person on the front of the card, Alesha then gives her special touch by writing (scribble) her name on the bottom at the back of the card.
The personalised handmade photo cards always seem to go down well, think we will have to change and think of something else for next year.
Our most treasured photo craft has to be the photo collage me and Mr.B put together, a few days after I gave birth to Alesha back in December 2009.
We used our photo printer (which is now broke) to print off some photos, we printed ones that really ment something to us, me & Mr.B feeding Alesha for the first time, a photo of Alesha when she first arrived into the world!
We also placed 2 professional photograph's into the collage, Mr.B standing behind me holding my stomach when I was pregnant and the other is Alesha's first professional photograph in hospital.
Also in the the collage you will see my first scan picture of Alesha and also her hospital name band which was on her leg. 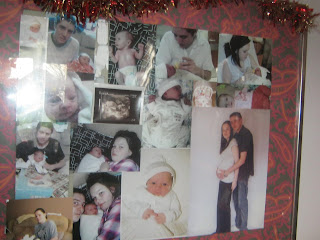 Now I have shared my craft idea's with you, why don't you share your's with us, or even a photo you would like to use in a craft, it's as simple as that!