It was a few weeks before Christmas and Alesha started to pay internet in the toilet.
Every morning the first thing I do is go to the toilet and sometimes Alesha follows me in, so she has therefore seen me many of times using the toilet.
She surprised me one winter's morning, when I had finished using  the toilet Alesha said, "mummy Alesha wee wee on toilet", so I picked her up and placed her onto the toilet (not expecting her to wee) and out comes a little trickle of urine, I was very proud of my little girl, so I gave her a big bear hug and said "well done for having a wee on the toilet", I then went on to ask her if she would like a little sweet as a reward for using the toilet, to which she replied "yes pleaseeeee mummy" haha! 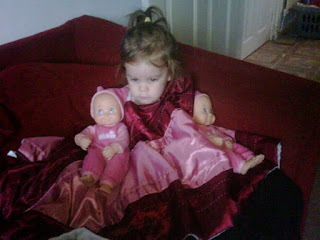 That was the first day the toilet training started, throughout that day I kept asking her every 15-20 minutes if she needed to wee to tell mummy so I can take her to the toilet, she had one accident that day but used the toilet a handful of times.
It's been a few weeks since then, Alesha is now dry during the day and wears a pair of knickers.

We put a nappy on her when she is having a nap and when she is going to bed at night time.
I think plenty of praise every time they use the toilet works wonders, another thing that has made Alesha want to use the toilet more is the fact she knows she gets to choose a little jelly sweet each time from the sweety jar!
Alesha is 25 month's and I am very proud she has decided to want to use the toilet early on, as I was honestly dreading the thought of toilet training.