We moved into a lovely 3 bed house in Horden,Durham the beginning of last month.

The back garden is a state, it broken concrete slabs here and there & weeds growing everywhere. So Mr.B went out last week and chopped down the weeds and put some weed killer on them, "that should do the trick for now"!
The front garden wasn't too bad, the grass just needed a basic trim down and so did the lovely little trees/bushes.
Considering the sun wanted to make an appearance today Mr.B decided he was getting the front garden sorted first thing this morning. We ended up taking a trip to Asda to buy some bags of wood chip, they were on offer 3 for £10 "bargain"! So we bought 6 of them, the poor car was weighed down on the way home!
Alesha was over the moon that she was 'finally' allowed out to play in the front garden with her slide and other toys. 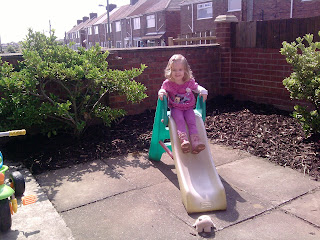 Still a few bits here and there to do to it but it's safe enough now for her to play in.
Now it's just the dreaded back garden to make a start on, think we will leave that for a while haha! 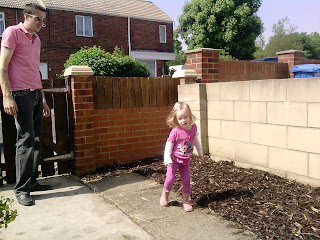