CHICKEN POX: MYTHS v FACTS
Dr Sarah Brewer says: Chickenpox is a miserable condition that causes children and parents a great deal of distress. Itching makes it difficult to settle during the day or sleep at night, and continued scratching can lead to skin infection and scarring. Traditional treatments tend to dry out the skin and provide only temporary relief before itching comes back. Thankfully, modern gels and mousses especially designed to relieve the itch, and to reduce the risk of infection, are now available.

Myth: Once you’ve had chicken pox you are immune from it for life

When your child contracts chickenpox the body develops antibodies called immunoglobulin. It is these antibodies that fight off the chickenpox virus in later life.

However not all those who contract the chickenpox virus will go on to produce protective levels of the vital antibodies and those that don’t may catch chicken pox again. A blood test can assess whether or not your child has immunity but this is not routinely offered in the NHS.

Usually only very persistent scratching causes scarring and most scars will fade after a few months. However, in around one in ten people some spots become infected with bacteria which, if left untreated with antibiotics can result in a scar. A topical product such as PoxClin Cool Mousse contains a natural bacterial blocker that helps prevent infection of the spots and therefore reduces the chances of scarring.

Myth: If you have had chicken pox you will never get shingles.

Shingles is caused by the same virus that causes chickenpox. As the virus does not completely clear from your body after you have chicken pox they may reactivate at some point in your life. Around one in five people who have had chicken pox will develop shingles at some point in their life.

Myth: Only adults or older people get shingles.

Any person of any age who has had chicken pox can develop shingles. Children under 12 months old who have already had chicken pox are particularly susceptible. However, shingles most commonly occurs in people over the age of 50.

Myth: All children should be exposed to chicken pox as soon as possible.

Chicken pox can be dangerous for any child with a low, or not fully developed immune system. This includes babies less than one month old, children with immune diseases such as leukaemia or HIV, and children who are on immuno-suppressant treatments such as chemotherapy or steroids. In addition, children under twelve months old who have had chicken pox are particularly susceptible to developing shingles.

Myth: There is no protection against chicken pox.

There is a vaccine against the virus that causes chickenpox and this is part of the routine immunisation programme in the USA, Canada and Australia. In the UK the vaccine is only offered to groups such as healthcare workers and others with no previous history of chickenpox who are in close contact with people who have a weakened immune system.

Myth: There is no medical treatment for chicken pox.

Chicken pox can be treated with an antiviral medicine such as aciclovir or immunoglobulin which can reduce the symptoms and likelihood of complications.

Treatment is usually only needed for those with low immunity such as babies less than one month old, children who are taking medications such as chemotherapy, immune-suppressing drugs or steroids, those with immune diseases such as leukaemia or HIV, or with severe heart, lung or skin conditions. If your child has not already had chickenpox and is in one of these groups, contact your doctor urgently if they have contact with chickenpox or develops chicken-pox symptoms.

Myth: The best way to reduce the fever caused by chicken pox is by cool sponging

Cool sponging causes a constriction of the blood vessels just below the skin if the water is too cold. This traps heat deep in the body which can make the fever worse. Doctors now advise placing the child in a gentle flow of air at room temperature, such as near an open window. Paracetamol will bring down temperature. Do not give ibuprofen, aspirin or other non-steroidal anti-inflammatory drugs (NSAIDs) as these may increase the risk of developing serious complications.

Calamine lotion is no longer recommended by many doctors because as soon as it dries on the skin it is no longer effective. Soothing cream, gel or mousse products such as PoxClin Cool Mousse have been clinically proven to reduce the effects of the itching.

Other useful treatments include an age appropriate dose of anti-histamine which can reduce itching.

There is no evidence to support this

On behalf of PoxClin we are doing a giveaway for a chance to win a bottle of PoxClin CoolMousse which is currently available from Boots, Sainbury's and Asda priced at around £10.80 for a 100ml bottle. 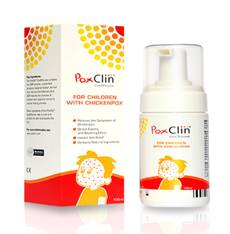 a Rafflecopter giveaway
Posted by Unknown at Thursday, May 16, 2013