WHAT AGE WAS YOUR BABY WHEN YOU FIRST GAVE THEM A PILLOW AND QUILT? 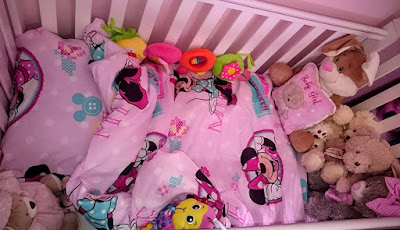 Tonight, will be Imogen's first night going to sleep with a toddler pillow and quilt. It will also be the first night of having a sleep with her cot lowered.

The previous 2 days me and Mr.R have noticed Imogen sat pulling herself up when we have gone into her, so we decided it's time the cot was lowered. Before she can do any harm to herself, i.e pullIng herself up and over the cot onto the floor.

Mr.R bought a toddler bedding set a few days ago, but I kept saying "lets hold out until her first birthday before we give it to her." I was suggesting to hold out because of health and safety reasons. Most people wait until the baby is one year old before they introduce a pillow and quilt, because babies can easily suffocate, so therefore it's clearly understand why some parents wait.

I gave in this evening and asked Mr.R to help me set up her cot. The main reason for me giving in was the fact of her still waking up once or twice a night. The second reason being, knowing it was in the cupboard waiting I just wanted it in her cot as it would look so lovely with the rest of her room having Minnie Mouse features aswel.

Imogen is 10 months old, so not too small in my eyes. She went down without a fuss at 7pm bedtime, with her bottle of milk and went straight to sleep. Mr. R is on a nightshift, so I'm hoping our little miss behaves for mummy tonight and doesn't wake up much now she is nice and snug.

What age were your little ones when you first introduced them to a pillow and quilt? 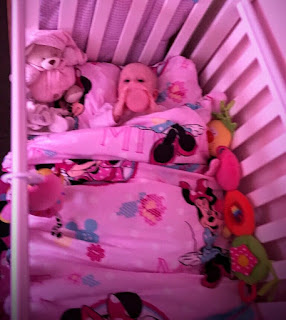