I've been very very quite the last few weeks, as we've been adjusting to our surprise shock of being pregnant with baby number 4.

It came as a total shock to us because I was on the mini pill and had recently been for smear test as I was due in for the coil, as soon as my period arrived.....BUT, that period I was waiting for never arrived.

Being 3 days late I asked Brandon if he would pop to our local Co-op and pick me up a cheap pregnancy test. From the minute he closed the front door, I was sat time watching hoping that he would be back the next minute. I just wanted to wee on that magical stick to find out the outcome a.s.a.p.

As soon as I'd finished I nervously held the stick in my hand, whilst I stared and stared at the stick egging it to hurry up and show the result. Then, slowly one line appeared and then two. "OH NO" I said to myself as I trembled opening the bathroom door.
Brandon came over to me and knew right away by the expression on my face. I held the stick out and he replied "ok we will talk later when the children are in bed".

We both said we would love one more child but not until a few years down the line. I wanted to go back out into the working world, not stay at home looking at the same walls everyday with no adult conversation.

It took us a few weeks for the pregnancy to sink in, to realise that we've alot of adapting to do. Bigger car, different home, more dirty laundry and not forgetting more stinky nappies!

A few weeks have passed since I seen those 2 lines on the magic stick. I've been for my 12 week scan, baby is healthy and measuring well. I was also informed that I have another cyst on my right ovary, it was then 6cm. I was informed that they are going to keep an eye on it and will let me know the next step of action after my 20 week scan, that's if the cyst has grown bigger.

Alesha and Alana are both over the moon that there is going to be a new addition to our growing family. Imogen is too young to understand, with only being 1 year old.
Both Alesha and Alana are hoping that I am carrying a baby boy. I'll find out the gender when I go for my 20 week scan, which is the end of February.

In the meantime, I've got a consultant appointment to attend in regards to my heart as I have a loop recorder implanted. I'm keeping my fingers and toes crossed that I can have another natural birth.

I will leave you all with my latest scan photo (which was at my 12 week scan). I'm no good with the nub theory so I haven't a clue whether it's a boy or a girl. 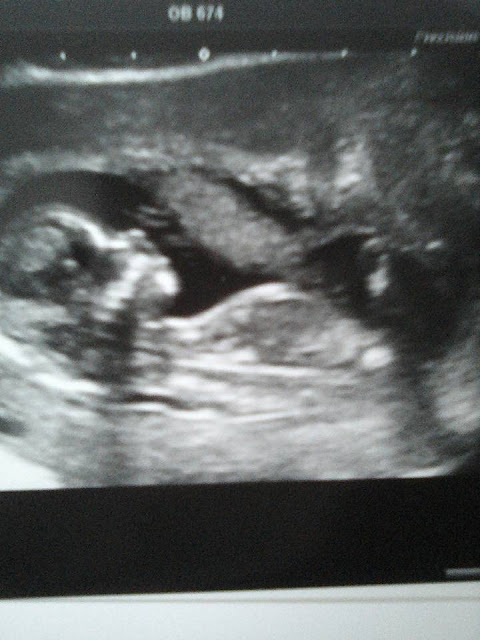