Kids Grow Up Too Quick

I always remember being pregnant with my first child, back in 2009. I would generally get the comment, "cherish every moment because they grow up too quick"! I used to give a 'hmm ok' type of giggle and agree with them.

How can they grow up too quick? Why is it such a used phrase? Babies just generally grow up day by day and not too quick. Each stage and milestone lasts a number of weeks. I remember loads of questions whirling around my head and just generally thinking, people were mad for saying that phrase.

I'd say, it wasn't until I was pregnant with my second child, back in 2012 it made me realise how much I actually agreed with that phrase, "cherish every moment because they grow up too quick"!
Simply because I was due to have another baby but yet it felt like my first born Alesha was still a baby until I looked a her and thought deeply about the huge difference there is going to be between them both.

The years have well and truly flown by and it's scary to think that at the age of 28, I'm going to be a mother of 4 young girls within a few weeks time! It doesn't feel 7 years since I brought my first baby into the world. Each of them have learnt so much and have progressed with a different milestone every so often, whether it's crawling, doing a handstand or even learning to balance on one foot.
I have tears in my eyes as I write this post, but only tears of purse joy and achievement. Me and Brandon have raised clever little ducklings and I feel blessed to be their mother.

This evening I was relaxing on the couch as my pelvic and hips were aching (joys of being pregnant), so Brandon gave the kids a bath for me. After he got Alana dried and dressed she went into her bedroom, that she shares with her older sister and happily sat up on Alesha's dressing table brushing her hair in a world of her own. Brandon sneakily took photos of her and came downstairs to show me, as it made his heart melt how mature she looked and acted for a 4 year old.

As tiring as everyday maybe, I'm just proud as punch of my little tribe and can't wait to welcome our finally baby into the world in July. 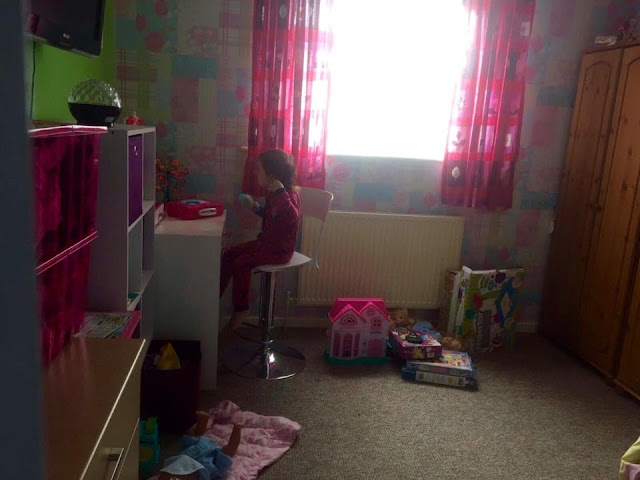